skip to main | skip to sidebar

An interesting study. Researchers report that a standard mutlivitamin and mineral can help women losing weight through dietary restriction to reduce their appetite and maintain their weight loss:

11/29/2007 - Multivitamins and minerals could reduce appetite in women on a weight reduction regime, while lower body weight and fat mass was more obvious in men, says new research from Canada.

The study adds to the body of evidence supporting adequate vitamin and mineral consumption for health, and is published in the British Journal of Nutrition.

Two studies were performed; the first looking at multivitamin and mineral consumption and body composition, and the second a double-blind, randomised controlled study compared appetite ratings recorded from the first study.

The first study, a cross-sectional survey of 267 men and 320 women aged between 20 and 65, used a dietary questionnaire. Lead researchers Genevieve Major from Laval University and collaborators from the University of Ottawa, and Pennington Biomedical Research Center (Baton Rouge) report that male consumers of vitamin and dietary supplements had lower body weight, fat mass, and BMI, compared to non-consumers.Similar results were recorded for women.

The intervention trial recruited 45 obese non-consumers of the supplements and assigned them to a 15-week energy restricted diet, supplemented with either multivitamins and minerals, or placebo. Energy restriction was achieved by reducing normal caloric intake by 700 calories per day. At the end of the study, the researchers report that all groups recorded weight loss, with no statistically significant difference between placebo and supplement groups. However, women receiving the supplements reported reductions in fasting and postprandial (after a meal) appetite ratings."Overall, this suggests that an appetite-modulating effect of vitamin and mineral supplements could be more significant in individuals characterised by inadequate intake in micronutrients," says Major.

"Appetite is increased in response to body-weight loss due to variations in hormone levels implicated in the regulation of energy balance such as insulin, leptin and cortisol," they wrote. "Since some vitamins and minerals are involved in the synthesis of these and other peptides and neurotransmitters that control food intake, a decreased micronutrient availability could affect peptide hormone levels and thus interfere with the signalling pathways that control food intake," they added.

The Day Post-Thanksgiving (or Black Friday as some call it) has brought an important topic back to my forefront: HYPOGLYCEMIA and other blood sugar control disorders.

I've blogged about this topic in depth previously and even helped a few women (through the internet) determine a new method of eating so that this was not an issue for them. Today, a woman named April just emailed me and told me some of her experiences.

She wrote: " [Cassandra,] I happened upon your site and read your opening and some of your blogging. I am also Hypoglycemic, I have been for years but truly had no idea until about this same time last year, about 3 days after Thanksgiving 06'. I was so sick of feeling dizzy and not ever really having the energy to even get out of bed for two hours after I had woke up. I also never had much energy throughout the day and stayed dizzy, anxious and spacey (like someone had drugged me) all the time.I also had mega mood swings. I kind of though tfrom my lack of energy and near constant dizziness that I might be dying from some underlying illness or something, because the doctors always told me I was healthy; they did continuously test me for Diabetes and couldn't find any sign of it although I had many symptoms. About this time last year, I peeled myself out of bed but felt even worse than usual ( I now know that felt even worse that usual because I had eatena lmost an entire cheery pie before bed that nightbefore). I had already figured out that I needed to try to find a source of protein in the morning,because my fiance's doctor told him to do the same because at times he had similar symptoms to mine....."

For myself, I've learned to overcome these feeling of dizziness, shakiness and general lethargy, by doing just what April was told to do by her doctor: eat protein with every meal, keep my carbohydrate intake low and include fats as often as possible.

You see, for those with blood sugar disorders, even including the disease diabetes, the body does not process carbohydrates and use them at a constant rate for energy. In these people, the body cranks out too much insulin in response to carbohydrate foods, possibly because they have enhanced absorption of carbohydrate from the gut into the blood stream, or because their blood glucose (sugar) levels are maintained at a lower level that other people. This surge of glucose and insulin in the body leads to a plethora of symptoms including shakiness, lack of concentration, moodiness, headaches, and general lethargy. The body is designed to use the carbohydrates faster than is really needed, so in turn, a person is left yearning for more food very soon after eating a higher-carb meal with a lack of protein or fat.

Last night, even though I know better, and came armed with my own crustless sugar-free pumpkin pie, I indulged in my aunt's high-sugar, white flour crust pumpkin pie, and felt the effects of the sugar-rush right away. I felt disorientated, unhappy and very tired (and that wasn't from the turkey). Then, in about 45 minutes, I crashed hard and started shaking so bad that I had to eat again. This time I chose just turkey and greens, and immediately felt better, without feeling overcome by a large dose of sugar.

There's just something about sweets that irresistable to some people, and maybe for those people, sweets and other high-carb foods should just be avoided as if they produced some terrible disease (which, they actually can do).

For people with symptoms of hypoglycemia, the answer is not to stop eating or eat more carbs, it's to eat minimal carbs, increased about of protetin and plenty of fat. With regards to the latter two foods, stay away from processed foods and anything hydrogenated for the most optimal choices.

The body is a smart piece of machinery. If your car's CHECK ENGINE light kept coming on after you put cheap gas in the tank, wouldn't you start to question the gas you chose to put in your vehicle? The same goes for food: If, when you eat a food, you feel like you've been drugged (unless you purposely ate something that would make you feel that way...), you'd think you'd really start to question the food you put in your body! However, some people don't. They think they're sick, or their doctor tells them that they are, and they end up feeling the same way for years and years.

People: we're all engineered to eat a specific way. Don't let any doctor or nutritionist tell you that you should eat just as the FOOD GUIDE PYRAMID tells you to (with a basis of grains) if that way make you feel worse. Listen to your body and try new things until you get your food consumption just right for you.

For hypoglycemia, if you feel terrible after eating foods with a high sugar content, then STOP. Don't fear that protein is going to give you kidney failure or that dietary fat is going to cause your heart to have an attack because none of those items are based on any conclusive science. Eat for you, not for anyone else. Include these latter foods in your diet and stay away from carbohydrates... your body will thank you in more ways than one.

From here on out, I will blog at least twice a week. It's been a busy time for me with my dissertation project. I cook all week and then catch up on work on the weekends. It's hard, but I'm sure my final data will be great.

Also, if you haven't yet seen it, please check out my new books on amazon:
1) The New Rules of Lifting for Women, by Lou Schuler, Alwyn Cosgrove and myself.
2) The Women's Health Perfect Body Diet.

Links to my books 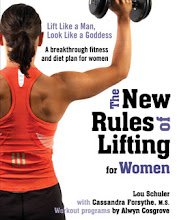 The New Rules of Lifting for Women 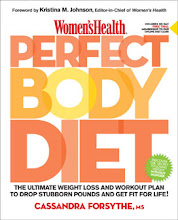 Cassandra Forsythe
Broad Brook, Connecticut, United States
Cassandra Forsythe-Pribanic is a PhD Kinesiology graduate of the University of Connecticut. Her MS is in Nutrition and Metabolism from University of Alberta, Canada. She's certified as a Registered Dietitian (RD) through the ADA, is a Certified Strength and Conditioning Specialist (CSCS), and is a Certified Sports Nutritionist (CISSN). You can also read more about her at cassandraforsythe.com

Followers of this blog